How ISIS Expanded Its Threat

Posted onNovember 17, 2015.by Prashant Pandya.Posted inWorld News. No comments yet .
After Setbacks in Iraq, a Revival in Syria

First known as the Islamic State in Iraq and Syria, members of ISIS fought with Al Qaeda in Iraq against American troops in a sectarian insurgency that helped drive the country into civil war in 2006 and 2007.

An alliance of tribal fighters and coalition troops handed the group a series of defeats, but it found fertile ground for a revival in the vast, stateless territories of northern and eastern Syria that fell into the hands of rebels fighting President Bashar al-Assad in 2013 and 2014.

The extreme brutality of ISIS, and its desire to dominate other militant Islamist groups in Syria, was ultimately too much for Al Qaeda. Its leader, Ayman al-Zawahri, denounced the group in 2014. 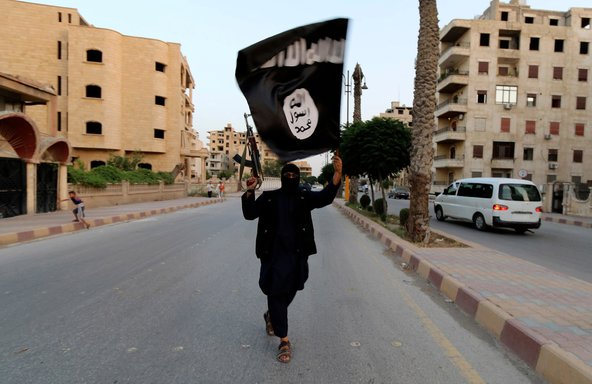 A member loyal to the Islamic State in Iraq and the Levant (ISIL) waves an ISIL flag in Raqqa June 29, 2014. CreditReuters

Life Inside Raqqa, the Jihadist Capital

A broad mix of rebel groups fighting the government of President Bashar al-Assad seized control of Raqqa, a city in north-central Syria, in March 2013.

Jihadist fighters played an important role in taking control of the city and soon began to push other rebels out for infractions such as drinking wine or talking to women.

By the summer of 2014 the city was the de facto capital of the Islamic State. It opened Shariah courts and religious schools; shuttered all three of the city’s churches; and punished criminals and critics alike with public executions.

After consolidating control over much of northern Syria, ISIS fighters poured over the border with Iraq and quickly drove the Iraqi army from Mosul, the country’s second largest city.

They freed thousands of prisoners and took over military bases and police stations and stole hundreds of millions of dollars from the city’s banks. Fighters raised the group’s black flag over public buildings and left the bodies of soldiers, police officers and civilians scattered in the street.

Within two days the group began imposing a harsh form of Islamic law and singling out police officers and some government employees for summary execution.

Interactive Graphic: How ISIS Came to Control Large Portions of Syria and Iraq

A New Caliphate and ‘Leader for Muslims Everywhere’

Abu Bakr al-Baghdadi, the leader of the Islamic State, declared the territories ISIS controlled in Syria and Iraq to be a new Caliphate, or a state governed under Islamic Law.

Mr. al-Baghdadi, who had not been seen in public for years, gave a sermonin July 2014 at a Mosul mosque and asserted his role as Caliph. That title gave him temporal power over the newly declared pseudo-state and implied a larger spiritual role.

After the Caliphate was announced, ISIS began describing Mr. al-Baghdadi as a ”leader for Muslims everywhere,” an idea met with outrage and horror by the majority of the Muslim world. 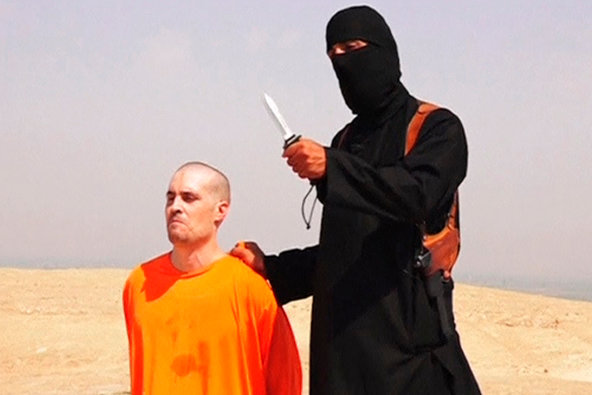 A masked Islamic State militant holding a knife speaks next to man purported to be U.S. journalist James Foley at an unknown location in this still file image from an undated video posted on a social media website. Creditvia Reuters

The Horror Before the Beheadings

The Islamic State has held at least 23 Western hostages from 12 countries since the group emerged as a force in Syria. The hostages have been tortured, executed and used as pawns in an ongoing propaganda effort.

The group released a series of graphic videos in the Fall of 2014 that showed militants beheading hostages, starting with James Foley, an American journalist taken prisoner in Nov. 2012. 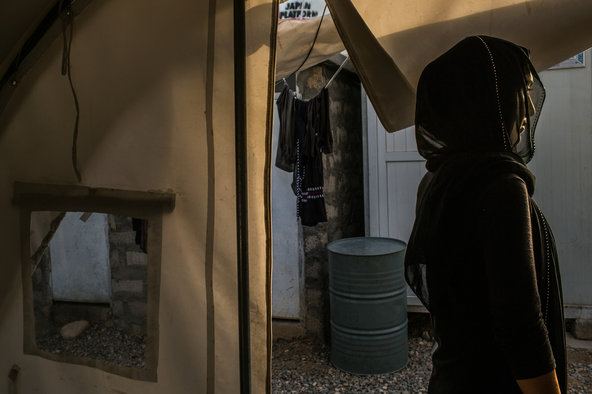 A Theology of Rape

ISIS has instituted sex slavery and a theology of rape in areas under its control. Claiming the Quran’s support, the militants have enslaved women and girls from the Yazidi religious minority in particular.

Sexual violence has become deeply enmeshed in the group’s organization and radical theology. It has established a network of warehouses where the victims are held, viewing rooms where they are inspected and marketed, and a dedicated fleet of buses used to transport them. It is also used as a recruiting tool.

The conversations between a young woman in rural Washington State and a British man with ties to radical Islam may provide clues about how ISIS recruits new members around the world.CreditVideo by Poh Si Teng and Ben Laffin on Publish DateJune 27, 2015

The Islamic State has demonstrated a worldwide reach. Using social media prowess, it recruits fighters and supporters, primarily young people, from around the world. It has also drawn pledges of support or allegiance from about three dozen jihadist groups in at least 18 different countries.

Earlier this month, an ISIS affiliate in Egypt claimed responsibility for an explosion that took down a Russian passenger jet leaving the resort city of Sharm el-Sheikh, killing 224. The day before the attacks in Paris, an ISIS bombing in Beirut, Lebanon, killed at least 43 people.

Western officials say that Libya has become a key militant training ground because the country is locked in a civil war and much of it is effectively stateless. In February 2015, ISIS released a video that showed the massbeheading of at least a dozen Egyptian Christians on a beach near Surt, Libya. 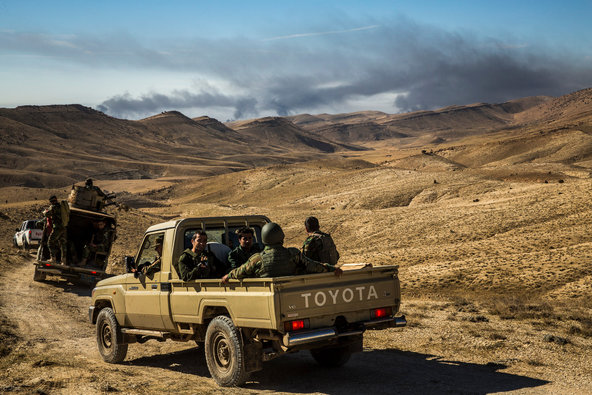 Mount Sinjar, Iraq Smoke from US and coalition airstrikes lingered over the town of Sinjar, as vehicles belonging to the Peshmerga’s Zeraavani Brigade made their way Thursday, Nov. 12, 2015.CreditBryan Denton for The New York Times

America Enters the Conflict, but Falters

The United States began military action against the Islamic State in Iraq in September 2014 in response to the threat posed by its expansion and the shock of a series of videos that depicted the beheading of American hostages.

The initial plan called for the United States to spend $500 million to train moderate rebels in Syria committed to fighting ISIS, but not the Assad government.

That strategy was heavily criticized and ultimately failed. The Obama administration said that it had trained only a handful of Syrian rebels, and said some of those fighters had given up some of their equipment provided by the Americans to the Nusra Front, an Al Qaeda affiliate.

Last month, the Obama administration said it would stop trying to create a new force and would instead use the money to provide ammunition and weapons for rebel groups already engaged in the battle. 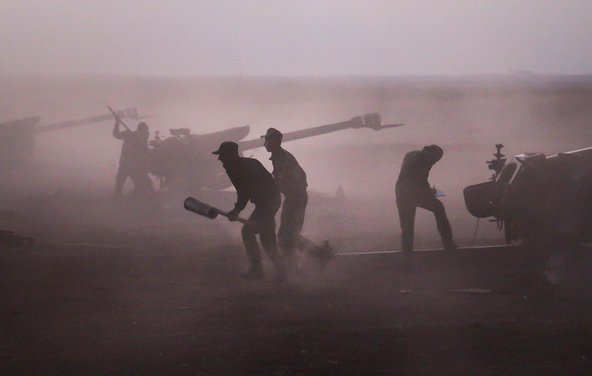 Syrian army personnel loaded howitzers near the village of Morek in Syria. The Syrian army launched an offensive in central and northwestern Syria aided by Russian airstrikes.CreditAlexander Kots/Komsomolskaya Pravda, via Associated Press

Russia, an unpredictable world power that has long been a muscular ally of Syrian President Bashar al-Assad, entered the conflict in September, adding a dangerous new element to a complex conflict.

Moscow sent large numbers of soldiers and materiel to an air base near Latakia, Syria, and launched air strikes against rebel fighters, including some trained by the United States.

Russian intervention has primarily targeted rebel groups that are not aligned with the Islamic State, creating a vacuum that in some cases has allowed ISIS to expand its territory into formerly rebel-held areas.