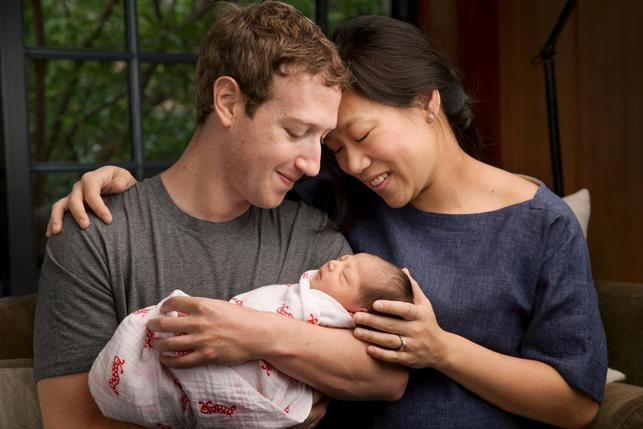 Mark Zuckerberg will put 99 percent of his Facebook Inc (FB.O) shares, currently worth about $45 billion, into a new philanthropy project focusing on human potential and equality, he and his wife said Tuesday in a letter to their newborn daughter.

The plan, which was posted on the Facebook founder and chief executive officer’s page, attracted more than 570,000 “likes,” including from singer Shakira, former California Governor Arnold Schwarzenegger and Melinda Gates, wife of Microsoft founder Bill Gates. The Gates and other high-profile billionaires such as Warren Buffett have set up foundations of their own to dedicate their massive fortunes to philanthropic endeavors.

Zuckerberg, 31, who will control the new initiative jointly with his wife, Priscilla Chan, while remaining in charge of the world’s largest online social network, said he would sell or give up to $1 billion in shares in each of the next three years.

Zuckerberg will keep a controlling stake in Facebook, valued at $303 billion as of Tuesday’s close, for what the company called the “foreseeable future.” According to Facebook’s most recent proxy statement, Zuckerberg owned 4 million Class A shares and 422.3 million Class B shares, which have 10 times the voting power of A shares. Combined he held 54 percent of the voting power of the company’s shares.

Zuckerberg said he plans to remain CEO of Facebook for “many, many years to come.”

Zuckerberg’s new project, the Chan Zuckerberg Initiative, is not his first in the world of philanthropy. When he was 26, he signed the Giving Pledge, which invites the world’s wealthiest individuals and families to commit to giving more than half of their wealth to philanthropy or charitable causes over their lifetime or in their will.

“Mark and Priscilla are breaking the mold with this breathtaking commitment,” Buffett said on Facebook. “A combination of brains, passion and resources on this scale will change the lives of millions. On behalf of future generations, I thank them.”

Melinda Gates chimed in, “The first word that comes to mind is: Wow. The example you’re setting today is an inspiration to us and the world.”

Buffett himself pledged shares of his Berkshire Hathaway Inc (BRKa.N) company that were then worth $31 billion to Gates’ foundation in 2006, and at the time ranked as the largest single gift.

Zuckerberg is relatively young to commit so much of his wealth. Microsoft Corp (MSFT.O) co-founder Gates was 45 in 2000, the year he and his wife founded the Bill and Melinda Gates Foundation. Buffett was 76 in 2006 when he committed to give away all of his Berkshire Hathaway stock to philanthropic organizations.

About $350 billion is given away each year in the United States by charities, said Stacy Palmer, editor of the Chronicle of Philanthropy. She said Zuckerberg and his wife’s announcement was remarkable not just because of the size of the donation, but because of their ages.

“Our lists of the top donors are usually dominated by people in their 70s or 80s,” she said. “This is a message to other young people who are deciding what to do with their great wealth.”

In welcoming the birth of his first child on his Facebook page, Zuckerberg posted a photo of himself, his wife and their daughter, Maxima, nicknamed Max, along with a post entitled “A letter to our daughter.” (on.fb.me/1MVnGOj)

In the 2,220-word letter, Zuckerberg and Chan, a pediatrician, touched on issues including health, education, Internet access and learning before announcing the Chan Zuckerberg Initiative, which aims to “advance human potential and promote equality.”

They plan to give away 99 percent of their Facebook shares over their lifetimes to advance the initiative, which was formed as a limited liability company. It will begin by focusing on curing disease, Internet connectivity, community building and personalized learning – the idea that technology can help students learn at different paces.

Maxima Chan Zuckerberg was born early last week — though Facebook did not specify her birth date — and weighed 7 lbs 8 ounces (3.4 kg) at birth. Last month, Zuckerberg announced he would take two months of paternity leave after the birth.

Chan and Zuckerberg have so far committed $1.6 billion to their philanthropy. They have given several donations this year, including to public schools, initiatives to bring better wireless Internet access and to San Francisco General Hospital, where Chan works as a pediatrician.

Zuckerberg and Chan said they will share more details when they return from their maternity and paternity leaves.

Zuckerberg has started his leave, a Facebook representative said, and will be available if “absolutely needed.” Sheryl Sandberg, chief operating officer, and Mike Schroepfer, chief technology officer, will run the company in Zuckerberg’s absence.