The NRIs: a life of dilemma 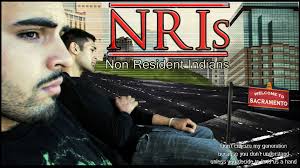 Thousands of us Indians emigrate every year, for higher education, lucrative jobs, better lifestyle and to join our spouses abroad but should they realize that they pay a heavy price for their choices.A tale of loneliness, anxiety, fear and uncertainty that they would rather leave untold.Here,I have kept an article as it is which was published in ‘The Hindu’ few years before which illustrate an agony of NRIs.

I have been living abroad for almost half of my 24 years of existence. Being an NRI for a substantial amount of time, I know the kind of lifestyle’s that most of them lead. Well, to start with, they are just a bunch of normal people who live abroad (not necessarily “developed” in the holistic sense).They can be split broadly into two distinct categories: The Never Return to India and The Now Return to India.

The Never Return is a unique breed of people. Their uniqueness lies in the fact that they think they are the most fortunate people in this world. For them India is a third world country which is confined to those once-in-a-few-years visits for the sake of completing the formality of seeing their loved ones. For them India is a chaotic, unhygienic and polluted place where they can’t live for a second without Bisleri water and where the sound of honking is noise pollution. Having said this, they don’t take the Indianness out of them because it will make them look out of sync with their identity — with their colonial masters — once they go back to their “holy” land. As such, anything to do with Indian “culture” needs to be imbibed — oops culture which suits their convenience, not culture in its purest form. Essentially, for this bunch of people being Indian is an opportunistic tool to sustain and increase their economic and social status in the land of the colonial masters.

Now, let’s come to the Now Return category. This constitutes a considerable proportion of people. They are actually in love with their homeland so much that they want to come back as soon as possible (or that’s what they say!!) They enrol their kids in Indian international schools so that they are in line with the Indian schooling system. They make sure that the kids learn Carnatic music, dance, cricket, etc. For this bunch of guys, the Indianness factor imbibed within their families is not a formality but something that they yearn for immensely.

Stuck in the vicious cycle of money and social pressures, they are not able to break away from the social barriers to return back home. As such, they look for ways to imbibe these qualities within their kin and tell people back home that their kids are more culturally inclined than any Indian kid could be. While in some cases this might be true, in most of the cases these are statements to satisfy the self from the guilt of not being able to return to their roots.

So what is the big deal? The big deal is that despite their vast difference in approach to living they share some common, pertinent issues.

One among the many issues is excessive academic expectations confronting the children — courtesy their NRI parents. Whether it is getting into Harvard or being the top in the school, there is no dearth of obsessive competition. The poor second generation kid is subject to immense pressure and his/her talents is more or less confined to the narrow path of engineering and not other streams of study. Not only does this reduce the appetite for the children, it makes their options and mindset for the future narrow. It is more of the NRI parent imposing what “they” want to be rather than what the “children” want to be. The main issue is the massive expectation they have from their children and therein lies the crux of the next issue confronting the NRIs.

The default thinking in most of the parents’ mindset is that since they have invested immensely in inculcating the “Indianness” in them, the children would in turn be the “goody goody” souls in the decisions they make in their adult life. While it is fair enough to argue that the Indianness inculcated would make the children more in sync with the Indian lifestyle, the fact of the matter is they are growing up in a completely different country. In today’s world, the social thinking of the younger generation is made up by the attitudes of their friends around them and not by the “default” tutorial classes of Indian culture. Of course, there are exceptions but they are just exceptions. For example, there is no point in the NRI parent living in a country for 20 years and then expecting the children to grow up the way “they want” and marry the person whom they think is good enough. Expectations such as marital affairs are a crucial part of the illusion that is confronting the NRIs. It is very crucial that they come to terms with the reality and set their priorities straight in life.

One needs to set their priorities and take a call on such issues. If they feel their culture and their way of thinking needs to be followed, then they should pack off and head back home. In an era of blossoming growth back home in India, heading back home is an economically practical solution and if one throws away the obsession with the foreign social “status”, I do not see any hindrance in coming back. You cannot expect to have the cake and the cherry, can you? If one is interested in staying abroad, then one should be prepared and be ready for the consequences (irrespective of its merit) with regards to the choice made by their children. While it is a duty for the children to keep the family in confidence on such issues, the reality of life is that a majority of the younger generation rarely looks beyond the self while taking such decisions.

Essentially, the crux of the issue confronting all NRIs is the weight of expectation one thrusts on the younger generation and the illusion with which they subject themselves oblivious of the practical consequences of the choices that they have made in their lives.

Whether one is in the Never Return or Now Return category, the NRIs need to confront issues head on rather than live in a illusion of their own!