What is hyperinflation?A case study of Venezuela 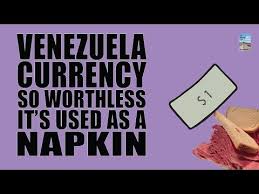 At present, Case of Venezuela should be well analyzed for economics student to understand hyperinflation,its causes and effects.Venezuela Doesn’t Have Enough Money to Pay for Its Money.Inflation in Venezuela is projected to increase 481% this year and by a staggering 1,642% next year, according to new estimates released Tuesday by the International Monetary Fund.
“Venezuela is on the precipice of hyper inflation,” says Kathryn Rooney Vera, research director at BullTick Capital Markets in Miami.

Here, we look at some of the factors which have led to the oil-rich country’s current crisis.

[1] What has gone wrong in Venezuela?
Venezuela’s President Nicolas Maduro has declared a state of emergency to combat the economic war he says foreign powers and right-wing forces in Venezuela are waging against the Latin American country.
Venezuela has the world’s highest inflation rate at 180% and there are shortages of basic goods as well as power shortages.
Opposition politicians have handed in a petition with 1.85 million signatures asking for a recall referendum to oust President Maduro from power.

[2]Why low oil prices are bad for Venezuela?
There is no question that Venezuela is heavily dependent on oil, of which it has the world’s largest proven resources.
Oil accounts for about 95% of Venezuela’s export revenues and was used to finance some of the government’s generous social programmes which, according to official figures, have provided more than one million poor Venezuelans with homes.
But prices for Venezuelan oil have plummeted. They almost halved from an average of $88 per barrel in 2014 to $45 in 2015.
By 13 May 2016, they had fallen to $35 per barrel.
The low oil price means that the government does not have the amount of dollars in its coffers it once had.
This in turn is a problem because Venezuela’s economy is not at all diverse.
The country grows and produces very little except oil and has historically relied on imports to feed its people.
A lack of dollars means it is struggling to import all the goods its people need and want.

[3]What’s behind the shortages?
The fact that the government has fewer dollars at its disposal to import goods is a large part of the problem.
But there are also other factors.
President Hugo Chavez, who governed Venezuela from 1999 to 2013, introduced price controls on some basic goods in 2003.
The idea was to make essential goods affordable for Venezuela’s poor. The prices of items such as sugar, coffee, milk, rice, flour and corn oil were capped.
Producers complained that the new regulations forced them to operate at a loss.
Some refused to provide goods for the government-run stores where the price-controlled goods were sold; others decided to stop producing these goods altogether.
The result was that the country became even more reliant on imports.

[3]What’s with the long queues?
With subsidized goods becoming increasingly scarce, many Venezuelans have been forced to queue for hours to get the essentials.
When a sought-after staple such as cornflour arrives at a supermarket, the word will spread quickly over social media and hundreds of people will queue to get it.
The government says the shortages are being made worse by an “economic war” being waged against it.
It says that some people are hoarding goods while other buy more than they need to sell them on at a profit.
To cut down on such behavior, President Maduro announced in 2014 that he would introduce fingerprinting for shoppers.
He has also accused merchants of holding back goods to drive up prices.
The government says that up to 40% of all subsidized goods are being smuggled into neighboring Colombia, where they are sold at a massive profit.
In August 2015, Mr Maduro ordered the partial closing of the border with Colombia.
Despite these measures, the shortages have become chronic and the queues continue.
Some Venezuelans are even reporting going hungry because they struggle to get the food they need.
[4]Why is inflation so high? [ Causes of hyper inflation]
With so many goods hard to get hold of, prices have shot up. There is a black market for everything from staple goods to dollars.
Shoppers report that bags of cornflour, used to make typical Venezuelan corn cakes or arepas, are going for many times the price set by the government.
Analysts say the inflation is made worse by Venezuela’s complicated exchange rate system.
There are different tiers for people buying dollars depending on what they are using the money for, with preferential rates for those importing essential goods and food.
There are also limits on how many dollars Venezuelans can legally buy, driving those who want more to the black market, which in turn further drives up the value of the dollar against the local currency.Really this is THE TRAGEDY OF DEMOCRATIC SOCIALISM…