Make yourself worth that much…

Posted onMarch 25, 2016.by Prashant Pandya.Posted inEconomics I understood. No comments yet . 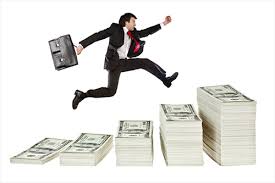 Don’t make big package the only thing in life. I will say, rather make yourself worth that much, that, package will run behind you. Asking for more money will make you greedy, but money running behind you will make you happier than ever.Here is the real story of an engineer,in his words, who had passed his BE in 2007 and now drawing CTC of Rs. 27 LPA!Wow…!

I started my career with a service based company named iGate Global Solutions where my initial salary was 1.86 LPA in 2007. I stayed there for more than 3 years.

Let me tell you, it was a huge money for me. I never dreamed of a bigger salary when I was there. When I was offered that salary in 2007, in fact I was thinking what will I do with that kind of huge money. My father had retired with a salary of 12k and my starting salary was 15k, which was unbelievable for me.

I was so grateful to the company that I always thought, I am contributing less than what company was paying me. To at least contribute my share better, I tried my best to improve myself but that brought promotion every year with hike making me work harder to contribute better, so that I could at least match the salary I was being paid. Something happened during last 4 months (with a new manager) that made me think about changing employer.

I started searching for my next employer. First interview was with amazon, they rejected me. Second interview was with a product based company in Bangalore. I got selected there. At the end, they called me for a package negotiation. I was drawing 3.4 LPA from iGate that time, so I was prepared to ask for 5 LPA and then to negotiate bit to settle for 4.5 LPA. But when asked 5L they agreed without saying anything. That was unexpected for me which made me the happiest person that day.

There was another surprise waiting for me. When I joined them, the same day they gave me a letter of fixed 50k bonus which they said would be paid after a period of 10 months. To be truthful I will not be able to express my happiness in words today what I had that day. I worked hard and in a matter of few months my colleagues recognized me as a good developer.

When I got the hike letter during appraisal cycle, there was a small mistake on the calculation. I got some 7% hike, although everyone else got 9% minimum hike. Hike letter was supposed to be given through manager but he did not hand over the hike letter to me. Except me, everyone else had gotten hike letter by that time and I was waiting for mine. When I got the salary, I realized, I got a hike of around 7%. That was shocking for me as I had gotten excellent rating that cycle(I had grown little greedy by that time). I asked my manager why I got so less hike. In response he told, there must be some mistake in the calculation and he is in contact with the HR team. He said, that is the reason I was  not given my hike letter till that day.

I was not happy. The delay in getting the rectified hike letter had made me think about a jump. I had actually started searching for a new employer.  After some 20 days I was called by my manager and he gave two hike letters, the first one was with 7% hike (it was cancelled) and the second was with 19% hike. I had received one of the highest hike that appraisal cycle as per the manager.

By that time I got selected for a travel solution provider leader in industry with a package of 8L. When I talked about this to my manager, he assured me of a similar salary, if I stay back. I stayed back. Got a promotion and a big salary hike in mid-term. Now my salary became 8.4LPA in 5 years of experience. Technically I got 3 hikes in that financial year. I was happy with my salary. Happy with the team and my manager was a gem of gems.

But I was not so happy with the work I was doing(it was kind of legacy coding). So thought of changing after around 8 months of my promotion. This time I had quite some corporate knowledge, which helped to negotiate for a bigger salary. I asked for 12 LPA. The HR guy actually started negotiating with me. He started saying it will be difficult for them to pay more than 10L citing various reasons. But I insisted for 11L and explained my stand. He agreed at the end.

I joined them which made my salary 11L with around 5.9 years of experience. I got good ratings & hikes (never less than excellent rating).In one and half years my package reached 14.7LPA. This is when I started thinking of changing employer again and got an offer of 18LPA from a software company. My manager assured me of similar salary, if I stay back. I stayed back. During mid-term  revision I got a good hike, which made my salary package 17.8LPA.

My manager was awesome. He was knowledgeable and was a developer actually. He used to jump to guide us whenever we were in need, he was more of a architect than just a people manager. After 6-7 months, there was a shuffle in my team. I was moved under a different manager. That time I thought, if I will work for a different manager why not in a different company with a still better salary?

I searched for a new employer. I negotiated for 23LPA (greedy) this time with an open option of negotiation but they somehow agreed. But when I got the offer letter, I was amazed to see 23L was base and they had added 3L+ as bonus component(that makes the CTC 26+ LPA) and company stock worth little more than 1L.

I am happy like a kid again. Its almost few months now in current company. I know they are paying much more than what I was expecting, so I am trying my best to improve myself technically and personally everyday to come to a level of 27L worth employee in my eyes. Hope to stay there for a couple of years, as, now I love the work, love the team, love the manager and of course love the package.

Now, I get a salary package of almost 14 times of my original salary i was getting 9 years back.