SAT or ACT?  Do you know which test is right for you?

Posted onMarch 30, 2016.by Prashant Pandya.Posted inCan I Do It?, Career Prospects. No comments yet .

The SAT and ACT both  are  a standardized test widely used for college admissions(Undergraduate means after High School) in the United States.

Colleges accept both test equally, so the choice is up to you! Here’s what you need to know to compare the exams.

Need help deciding between the ACT and the SAT? Try a free practice test for each and see how you score!

More Students Are Taking Both the ACT and SAT

AS if applying to college isn’t taxing enough, the process seems to have been ratcheted up another notch. Ambitious high school students are no longer content with just one college admissions test. Not a single college requires it, but many applicants to the nation’s most selective colleges and universities are taking — and retaking — both the ACT and the SAT.

For more than half a century, the ACT was the also-ran of the college admissions world. Although almost every college for years has accepted either test, the SAT has long represented the gold standard. Some Eastern colleges actually frowned on the ACT, and few students outside the South and the Midwest, where the ACT has been the dominant assessment, would even consider taking it.

“Until recently, even within the admissions community, the ACT was to a degree the stepchild of the SAT,” said Tom Parker, dean of admissions and financial aid at Amherst College. “So even with my own staff, I had to be scrupulous to be sure both tests were given equal weight. That’s just not an issue anymore.”

It’s not that the SAT is losing customers. On the contrary, the number of test takers has grown. It’s that the ACT is growing much faster, in part because 12 states now require, and pay for, all public high school juniors to take the test. But that’s not the only reason for the ACT’s rising popularity. There is also a real shift in the behavior of top high school students, with many more choosing to work toward impressive scores on both tests.

“I don’t know all the pieces of why this is happening, but I think more students are trying to make sure they’ve done everything they can,” she said. “And for us, more information is always better. If students choose one or the other, that’s fine, because both tests have value. But if they submit both, that generally gives us a little more information.”

At Harvard, the University of Virginia and the University of California, Los Angeles, about a quarter of applicants for last year’s freshman class submitted ACT as well as SAT scores. And those are just the students who did well enough on both tests to believe their scores would boost their chances. Far more take both but submit only one.

Some schools have 10th graders try the Preliminary SAT but also PLAN, the ACT version, to see which yields a better score and thus which to prep for. The following summer, serious test preparation starts. Whether reviewing on their own, in classes or with a private tutor, a considerable chunk of the next year and a half is devoted to vocabulary lists, problem sets, mock tests, real tests and retests; Advanced Placement and SAT subject tests add to the workload.

“What I did was cut out sleep,” said Sarah Rodeo, who graduated this spring from the Hewitt School, on the Upper East Side of Manhattan, and will start at Vassar this fall.

Because she was also juggling up to 10 dance and yoga classes a week, Ms. Rodeo said, regretfully, that she had not been able to take a practice test each weekend, as many classmates did. And to her intense frustration, her math score remained unimpressive.

“I had kind of a panic attack in spring of junior year,” she said. “I honest to God went into therapy to work on my anxiety about the math, because for the amount I worked, my score should have been higher.”

Her guidance counselor reminded her that she had actually done better on PLAN than the PSAT. So after a year of prepping for the SAT, Ms. Rodeo got a copy of the “Real ACT” guide and started in on ACT strategies (guessing permissible; only the SAT deducts for wrong answers). She scored a 30 out of 36.

A second taking of the SAT lifted her score by 90 points, to 2150 out of 2400. “That still wasn’t good enough to get me into Brown, which was what I wanted,” she said. Her scores rose a bit more with a third taking, but she never cracked 700 on the math.

Was it worth the effort? “I’m still not sure how I feel about using all that time prepping instead of playing the piano, playing with my little brother and sister, or seeing my friends,” she said.

Admissions officers worry that test prep has become the main junior-year extracurricular activity. Preparing for both tests, they say, may be overkill. They point to parents as the ones cranking up the testing pressure.

“I think the dramatic increase over the last five years in the number of ACT scores we receive comes in conjunction with the increased selectivity,” said Eric J. Furda, dean of admissions at the University of Pennsylvania. “More and more parents think they can’t just stick with the regular road map for getting into college but need to consider every option that might help them show their child in the best possible light.”

At Shaker Heights High School in Ohio, Eileen Blattner, chairwoman of the guidance department, said that all but seven of the top 10 percent of the graduating class took both the ACT and SAT, and then took their better test once or twice more.

Travis August 5, 2013
I graduated a few months ago and am going to a top 25 school. I can assure you I’m ambitious and took only the ACT, and only one time. The…
JG August 5, 2013
I would strongly suggest to all parents who are concerned about having their child attend a highly selective college that the best approach…
Jonathan Payne August 5, 2013
It’s a game and the joke is on us parents and our children. The college industry is huge and everyone is convinced they must go to college,…
SEE ALL COMMENTS
“I say, all the time, ‘Don’t go crazy,’ but particularly for parents who use it as a ring on their finger if their kids get into a high-status school, they’re going to have their kids take and take and take the tests.”

If it were up to Robert Schaeffer, public education director of FairTest, an advocacy group critical of standardized testing, neither test would be required. (His organization compiles a list of hundreds of colleges that are test-optional.) But he does see one positive aspect in the rise of the ACT as a state-mandated test.

“In 2013, there were proposals in a number of states to integrate a college admissions test into the state system, and as states come out of the recession, we may see more,” Mr. Schaeffer said. “Using a college admissions test as the state’s high school test cuts out one test, which responds to growing pressure from teachers that enough is enough.” 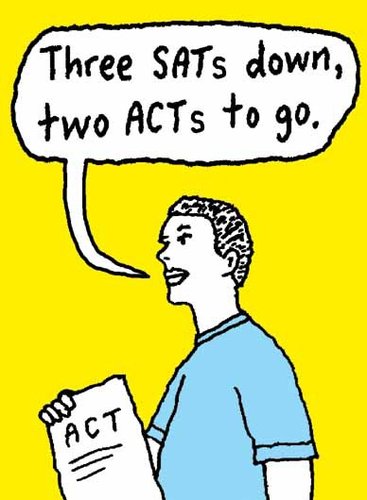 Credit Peter Arkle for The New York Times
Colorado, Hawaii, Illinois, Kentucky, Louisiana, Michigan, Montana, North Carolina, North Dakota, Tennessee, Utah and Wyoming require students to take the test, and Arkansas pays for the ACT if districts want to offer it. The SAT has only Delaware, Idaho and Maine.

There are clear differences between the tests. The ACT has four long sections, the SAT 10 shorter ones. The ACT has a science section and covers more advanced math, including trigonometry.

“A third of SAT reading is vocabulary, so for students with limited vocabulary, the ACT is better,” said Sasha DeWind, director at Tutor Associates, based in New York. “The questions are passage-based, and if you understand the passage, you’ll probably get the answer right. And even though the ACT covers harder math, it’s more similar to what students have done in school. The SAT is about getting the students to understand what they’re being asked.”

“Students with learning disabilities who qualify for extra time usually do better taking the ACT, where the extra time really matters,” she said.

Jonathan Chiu, the national content director of high school programs at the Princeton Review, offers a similar analysis, citing gamesmanship in taking the SAT. “ACT is more straightforward in their question construction,” he said. “In math, they give you the information you need and tell you to solve for x. The SAT would give you the information, then ask for the value of 1/x. But since you’re going to have to solve for x to get there, they’ll make the value of x a possible answer, knowing your eyes will go straight to the number you’ve just figured out.”

Mr. Chiu said about 47 percent of the students he works with now take both tests because they “want to sweeten their college portfolios.”

Just a decade ago, when Megan Fox’s twin siblings were getting ready for college, they considered only the SAT. But times have changed, and Ms. Fox took, and retook, the ACT as well as the SAT, ultimately preferring the SAT because it seemed to go faster.

“I like having a lot of smaller SAT sections because it’s a lot easier for me to not lose my concentration,” said Ms. Fox, a rising senior at Jericho High School on Long Island. “Also, the ACT has a science section and I’m better at English than science. But my scores were about the same.”

In the end, that is true for most students.

“The tests predict college performance equally well, and despite urban legend, most people do about as well on one as on the other,” said William R. Fitzsimmons, Harvard’s dean of admissions and financial aid.

“We see a lot of test results between the ACT, the SAT, the subject tests, Advanced Placement and the International Baccalaureate,” he added, “so it doesn’t concern us at all whether students send the SAT, the ACT or both.”